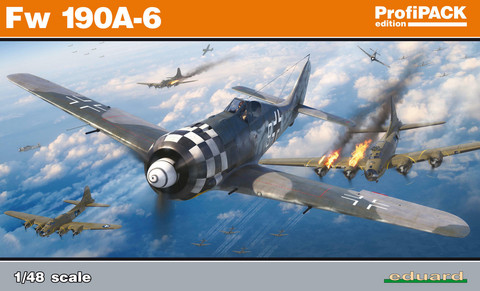 Machines are from the Eastern and Western Front.

The second half of the Second World War saw the Focke-Wulf Fw 190, in its various forms, emerge as the best of what was available to the Luftwaffe. The dedicated fighter version was a high performance, heavily armed machine.

Its development had a precarious beginning, against a 1938 specification issued by the Technisches Amt, RLM. The first prototype took to the air on June 1st, 1939. After a series of improvements and even radical changes, the design culminated in the fall of 1940 in the pre-series version Fw 190A-0 to the tune of twenty-eight pieces. Six of these were retained by the test unit Erprobungsstaffel 190 at Rechlin, which was tasked with conducting service trials. These revealed a wide range of flaws to the point where the RLM halted further development. Despite this, on the basis of urgings from the test unit staff, the aircraft was not shelved. After a series of some fifty modifications, the RLM gave the go ahead for the Fw 190 to be taken into inventory of the Luftwaffe.

In June 1941 the Luftwaffe accepted the first of 100 ordered Fw 190A-1s, armed with four 7.9 mm MG 17s. By September 1941 II./JG 26 was completely equipped with the type operating on the Western Front. November saw the production of the next version Fw190A-2, powered by a BMW 801C-2, and armed with two 7.9 mm MG 17s and two MG 151s of 20 mm caliber in the wings. Part of this series received an additional pair of 20 mm MG FFs, thus attaining an armament standard of later types. Asignificant advancement to the design came in the spring 1942, when the BMW 801D-2 became available, who´s installation gave birth to the Fw 190A-3. July saw the development of the improved A-4. Both were armed with what became the standard two fuselage mounted MG 17s, two wing mounted MG 151 cannons, and two MG FF cannons, placed inboard of the wheel wells.

During 1942 production had intensified, and a production facility was set up under license at Fieseler. Thanks in part to this, production rose in 1942 to 1,878 units as opposed to 224 in 1941. Large-scale production of the A-5 was initiated in April 1943 with an identical wing to the A-4, but with a nose extension that would become standard on all subsequent Fw 190A versions up to the A-9, and also on the corresponding F types. July saw the development of a new, strengthened wing, which incorporated MG 151s instead of the MG FFs in the outer position. The adoption of this wing developed the A-6 version. Further changes developed the A-7, produced during the end of 1943. This version came about with the replacement of the fuselage mounted MG 17s with 13 mm MG 131s.

Further improvements led to the Fw 190A-8, and this version became the most widely produced with some 1400 units made. The most significant change to this variant was the installation of the GM-1 nitrous-oxide injection system, for temporary power boost in combat. Aportion of A-8 production was built as the A-8/R2 and A-8/R8, armed with MK 108 cannon in the outer wing location, and with armoured slabs added to the cockpit sides and a modified canopy. The final production version of the BMW 801 powered fighter was the Fw 190A-9, equipped with the BMW 801TS of 2000 hp (1470 kW).

There was a parallel development of these fighter optimized aircraft with a dedicated fighter-bomber version, the Fw 190F. These aircraft had reduced wing armament to two MG 151 cannons in the wing root position. The engine was optimized for low level operation, and the armament options varied to satisfy the ground attack role, including bombs of various weight classes and a variety of anti-tank rockets. This branched into the extended range Fw 190G version.

Development of the throughbred fighter continued in the guise of the Fw 190D, which began to reach Luftwaffe units in the second half of 1944, and was the result of mounting an in-line Jumo 213A-1 engine into a modified Fw 190A-8 airframe. Although the Fw 190 never achieved the widespread usage of the competing Bf 109, its contribution to the German Air Force was certainly significant through the second half of WWII.

Fw 190s saw service on the Western Front as well as in the East. As heavy fighters with imposing firepower, they found themselves integral components, from 1943 onwards, within the units tasked with the protection of the Reich from the ominous clouds of allied fourengined bombers. This is where the A-8 version was instrumental, along with it´s A-8/R2 armoured development. This version, with its firepower, was a very ominous and daunting foe for the bomber crews. From the second half of 1944, their danger was kept in check to a degree by escorting P-47s, and necessitated the development of the P-51 Mustang.